How To Get Your Clients To Change Their Own Minds 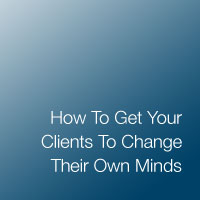 Have you ever had the misfortune of working with a client who insisted he knew better? (Guest Post by Andrianes Pinantoan)

It’s almost inevitable to meet one in your career as a freelancer. They put you in… let’s just say, a “unique” position.

So what’s a freelancer to do?

Fortunately for you, there is a powerful mechanism in human psychology you can exploit. It’s called cognitive dissonance, a mental discomfort you experience when you hold conflicting beliefs.

In theory, we all try to reduce this discomfort and maintain one consistent belief system.

The best story to illustrate cognitive dissonance hails from thousands of years ago, called “The Fox and The Grapes”. You’ve heard of it, right? When the fox fails to reach a bunch of grapes on a tall tree, he decides he doesn’t really want them all along.

The fox had a belief that he could reach the grape. His experience showed otherwise. That causes a dissonance. But instead of learning from his mistake, he changes his belief to stay consistent.

In the original study of cognitive dissonance, researchers even found that they could make a boring task more interesting to participants by paying them less money. The participants rationalized their behavior by telling themselves that if I don’t make money out of this task, then it must be because it’s interesting.

In other words, both the fox and the participants “self-persuaded” themselves out of their original goals.

Wouldn’t it be great if you can get a client to do the same? Here are two ways to do it:

1. Let’s Pretend For a Minute…

I often witness a conflict between two people, where both of them try to talk each other out of their positions - and no one is listening. “Here’s a study!” one would say. Here’s my experience. Here’s my friend’s story. Here’s what this famous person said about the issue.

Sure, person A wasn’t talking when person B was making his case, but that doesn’t mean he was listening either. Person A was simply waiting for person B to stop so HE can make his case.

All these traditional persuasion techniques, such as using data, authority or personal experience, as you may already know, rarely work: you never see debate teams convince the oppositions change their minds!

The reason why is because the other party have their shields up. They know you have an agenda. And people hate to be wrong (remember: cognitive dissonance).

It’s like negotiation during times of war. Even little concessions are hard to come by at that time. Why not negotiate when you’re still friends?

So how can we get others to lower their shields and listen?

Back in World War 2, the United States was facing a shortage of meat. To solve the problem, the government consulted with social psychologist Kurt Lewin. At the time, housewives made the decision of what to eat at home.

So Lewin gathered them and divided the group into 2. The first group sat and listened to the benefits of replacing meat with intestines and kidneys, which, of course, they all hate. With the second group, Lewin asked them to brainstorm how they might persuade other housewives in the country to do the same.

The results were stunning: only 3% of group 1 began serving intestines and kidneys to their families. Group 2, however, had a 32% conversion rate.

This self-persuasion phenomenon has been duplicated many times since then. In a study published earlier this year, researchers found that people who are asked to deliver an anti-smoking message are more turned-off by cigarettes than people who sat and listened passively.

So how do you get your clients to change their own minds?

Ask them to take your perspective and explain to you what the benefits of your approach are, and they will be more likely to change their own minds.

Here’s a script I like to use when I do this:

“Ok, so we have this problem. And we have two potential solutions - both of which are great. The question is which one to choose.”

This is first part is important because you shift their focus from about “being right” to “solving the problem”. You also acknowledge their input and show that you’ve evaluated it. Then I continue:

“Just so we can make a true comparison between the two, let’s pretend for a second that you’re me. What do you think are the benefits of my solution?”

Then you write down all of what they suggested on a whiteboard or a piece of paper. That’s it. You conclude with:

“Hmmm. What do you think?” – Be genuinely curious. There’s a good chance they would have changed their minds.

This exercise works by changing their focus from the negative side of your argument, to the positive one – and essentially introducing dissonance into his/her own belief system.

2. No Knife Behind My Back

In one episode of How I Met Your Mother, Ted, an architect about to get his design built in New York City, faces opposition from Zoey, a protester trying to conserve the old building that’s about to be torn down due to Ted’s project.

They somehow end up in the same party, where Zoey dupe Ted into spilling his guts about how he hate his employers - and she records the incarcerating conversation on tape. She is about to use the tape to her advantage when she overhear a conversation between Ted and her husband.

Zoey’s husband told Ted that his wife can be a little brat, and he offered Ted his help: he could steal the tape tonight, when she is sound asleep. Ted refuse, however, and tell him that he don’t think Zoey is being a brat - she only stood up for what she believed in.

Guess what Zoey did next?

The story above illustrates how second-hand praises are more powerful than direct ones. When you talk about anything behind someone else’s back, the conversation’s impact on that person multiplies.

Why? Because he assumes you’re telling the truth. It’s a great way to introduce dissonance.

So when you talk positively about person A to person B, it doesn’t matter what kind of disagreement the two of you have had, person A will start to self-persuade. “Maybe he isn’t that bad? Maybe I overlooked something that he caught? Maybe he’s right?”

And this is easier to pull off than you might think. Here are 2 ideas:

So there, who said you have to stab someone in the back to win an argument?

Guest Post: Andrianes Pinantoan is a web copywriter who is currently part of the team behind Open Colleges. When not working, he can be found on Google+.

Why Your Designs Are Not Getting Better

Everyone starts their design career in the same place. We might have an inclination of what good design is, but we suck at the execution. But we go to school or teach ourselves the software, the rules, the techniques and…

Dealing With the Misconceptions of First-Time Business Owners

If you do any kind of freelance work you’ve probably been contacted by someone wanting to start an online business or who has a small business and they want to move it to the web. Unfortunately, most of these people…

How to Tell a Client No

As a designer you must posses this skill, and yes, it is a skill. It can be one of the hardest things to do if you are not a very assertive person. Yet it is a vital part of becoming…