Is There Enough Room for Both of Them 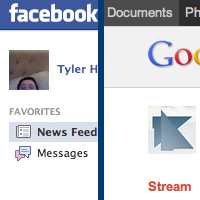 The social media battle is on. Facebook is way out ahead but Google + has started to really grow now that is has gone live. Is there enough room for two similar social networks or will one win out?

There has been a lot of *cough* buzz about Google Plus, Google’s latest venture into the social scene. And unless something major goes wrong, this time they will be successful. But will this be like the migration from MySpace to Facebook, or is there room for both networks.

With most new innovations, the tech field and other creatives out there were the early adopters of Google Plus. I suppose I fall in that category. Personally, I think the service is great and holds a lot of potential. The best part about it is the quality of the content, which may have to do with the group of people currently using the service. When I created my account early on in beta there were only a handful of people I went to college with, but I ventured out and circled a few famous web designers and quickly started finding other people to follow. Google Plus has become my Twitter. Lots of interesting information from interesting people. Of the people following me and those I follow only a handful I’ve ever meet in person but that doesn’t really bother me.

Google Plus gives you a way to listen to people you might not have had a chance to any other way. And circles allows you to fine tune your feed, keeping artists in one field, social media gurus in another field and so on. Another great feature is the fact that there is no pressure to “Friend” anyone. If an old acquaintance you don’t care for circles you, there is no obligation to do so back, and if you do, you can always dump them off in a Circle you never read and they’ll be none the wiser.

Facebook on the other hand is a mess of friends, family, people I’ve met at parties and old high school classmates I haven’t talked to in years. The drawback of the service happens to also be its strength. I wouldn’t mind closing my Facebook account because for the most part the feed is largely filled with garbage, but I am reluctant to do so because Facebook happens to be my only connect with some people. Facebook has such a huge number of members and we have invested so much time in creating our Friends Lists that I feel it would be hard for people to abandon the service. Facebook is filled with non tech people so getting them to try a new service is very difficult. Anything short of a mass exodus and I feel Facebook will remain strong for at least the next year.

This of course creates a dilemma for many of us using both services. Google Plus seems to be more useful but Facebook holds all your real life friends and family. I guess we’ll have to see if one comes out on top but for the time being, both services will be pushing out new features and duking it out for the social crown.

There are so many thing you can compare business to but dating is particularly relevant. The sweaty palms, nervousness and fear of rejection. Hopefully made worthwhile with a long-lasting romance.

One of the best ways to get repeat visitors is to increase the amount of engagement on your site. If there is no way for users to interact or react to your content than you are just an information site.…

Getting Traffic to Your Older Posts

It tends to be the case with most posts that once they get pushed off the homepage, they get read less and less often. Just because a post isn't brand new doesn't mean readers wouldn't like it. So here are…